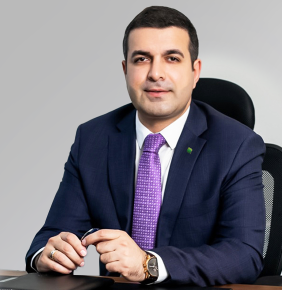 Chairman of the Management Board

Huseynov Aydin Huseyn was born on May 21, 1979 in Aghsu region. He completed his secondary education at the Republican Lyceum with major in Physics, Mathematics and Informatics in Baku.

He has 19 scientific articles published in foreign and local journals.

He studied Small and Medium Enterprise Financing at Frankfurt School of Finance & Management, and Capital Markets and Financial Instruments at the Institut de Formation Bancaire Luxembourg, and passed International Certifications.

Since 2019, he has been a member of the Banking, Finance and Insurance Committee of the American Chamber of Commerce in Azerbaijan (AmCham) and from 2018 to 2020, Chairman of the Expert Group on Treasury and Fund Management of the Association of Banks of Azerbaijan (ABA).

From 2021, he is the Chairman of the Management Board of Rabitabank OJSC.