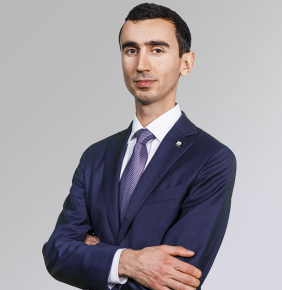 He started his banking career in "Rabitabank" JSC in 2005 as a Senior Specialist in the "Trade and non-trade operations" department of the "Customer service" department.

In 2012, he was transferred to the position of advisor to the Board of Directors.

Since 2013, he has been working as the General Director (Marketing and Alternative Sales) at Rabitabank OJSC.