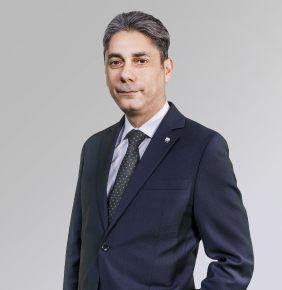 General Director, Member of the Management Board (Chief Financial Officer)

In 1996, he graduated from the "Accounting" faculty of Azerbaijan State University of Economics.

He started his banking career in 1995 as an accountant-operator at Renaissance Commercial Bank, and in 1997-1999, he worked as the Deputy Chief Accountant at the same bank.

In June-September, 1999, he worked as the Chief of the "Correspondent Relations" Division at the Bank of Baku Commercial Bank.

In 2009-2017, he served as the Deputy Chairman of the Management Board of that bank.

From 2017 to present, he has been working as the General Director (on Finance and Infrastructure) of Rabitabank OJSC.